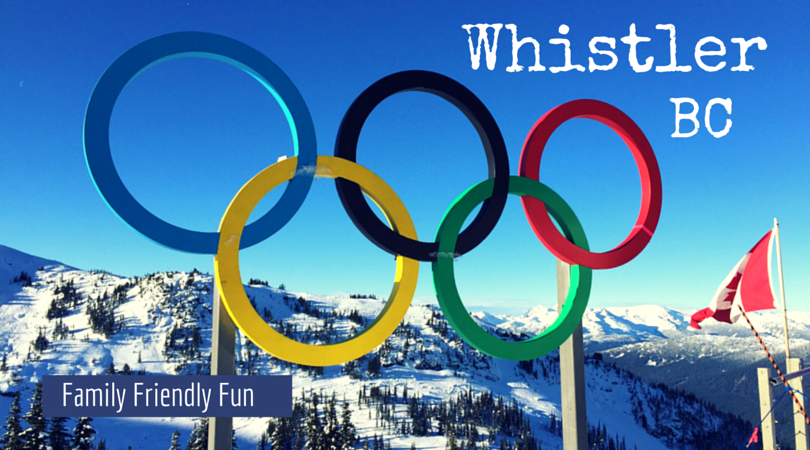 Whistler, British Columbia, Canada is the quintessential ski resort town where in winter ski boots and helmets are as much apart of the fashion as the high end names on the purses and parkas. And in summer, golf courses and local hiking trails and waterways are filled with outdoor seekers. Nestled in the mountains just about a two hours drive north of Vancouver B.C., the drive to Whistler along the Sea to Sky highway is a sight to behold in of itself. With jaw dropping scenic views of speckled islands climbing up out of the water, quaint villages that seem to sprout naturally out of the rocks, and vistas that belong on inspirational posters, the drive to Whistler is as enjoyable as the destination.

Best known as a world class ski resort, Whistler also played host to the alpine events during the 2010 Winter Olympic games. With Olympic rings and Inukshuk (the Games logo) sprinkled throughout the village and mountains, the Games are still featured prominently throughout the area. Including Whistler Olympic Plaza, which played host to medals ceremonies then, and ice skating and mini golf now.

We recently returned from our second winter trip to Whistler (the first with our toddler son) and loved every minute of it. No matter which time of year you visit, there’s something for you and your family. 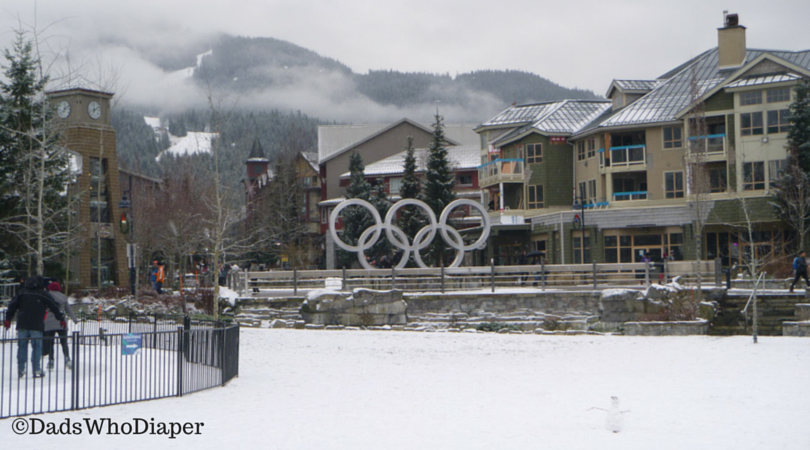 Choosing a place to stay in Whistler is likely going to be the most complicated decision you make. With elite service at luxury hotels like the Four Seasons Whistler, to affordable condos and hotels, to timeshares, there is a wide variety of accommodations available for families of all sizes. We used a timeshare at the Valhalla condos run by Whiskey Jack. Clean, comfortable, and within walking distance to everything, it was a great option for our family of five, including a young toddler. While the decor was a bit dated, it certainly didn’t put a hamper on our trip and with a washing machine and dryer included in the unit and plenty of storage, it was a perfect place to relax after a day on the mountain. You can find a large list of area lodging here. 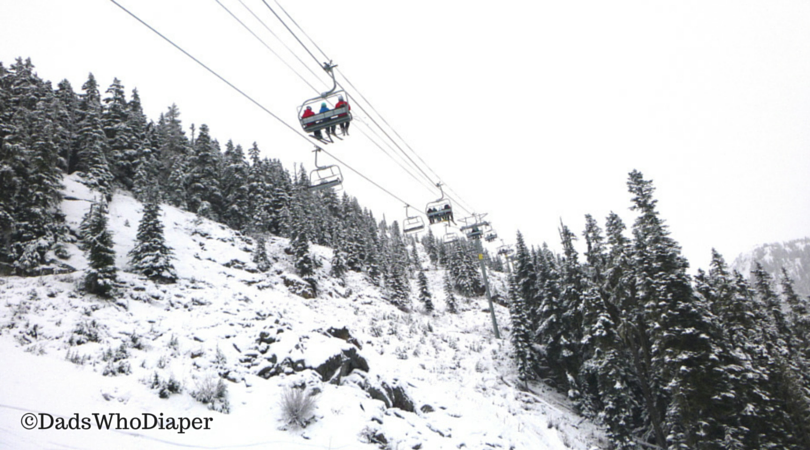 Whistler and Blackcomb mountains are considered world class skiing by any stretch of the imagination. With two top notch mountains featuring terrain from beginner to expert, there’s little you can’t find between them. Gondolas sweep you right out of the village and quickly up the mountain, getting your start on the slopes couldn’t be easier. Pro Tip: get in line early or try the mountain’s FRESH TRACKS program to beat the lines. Arriving around 8:30 or later can force you to navigate the line maze with many of your new skiing friends for 30 minutes or so. Even with a wait at the bottom, that’s about the only time you’ll wait for a lift again. With so much acreage spread across two mountains, lift lines during moderate times in the season will be low to non-existent. During high times, expect slightly longer longer lift lines. 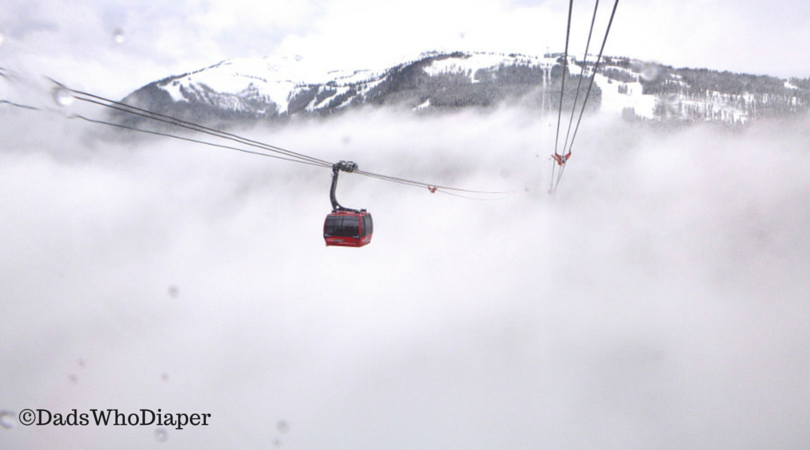 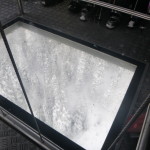 Our first trip to Whistler we never made it on the Peak 2 Peak Gondola. It was a shame and we always regretted our decision not to. This time however, we made sure it was a must see. After skiing a bit on Whistler one day, we decided to take the leap over to Blackcomb and used the Peak 2 Peak as our carriage. Boarding the cabin with about a dozen others we were comfortable (even with plenty of ski gear) for the ride over. With slightly cloudy skies and some low level fog we could still see a fair amount of the valley and surrounding peaks and loved our ride. After skiing Backcomb for a bit we decided to head back and without any planning at all we managed to snag a clear bottomed cabin and loved gazing into the snowy forest bed below. The gondola is free with your lift ticket, so hop on board and take advantage of the world’s longest free span gondola (just four towers for the whole 1.88 miles) you won’t regret it. 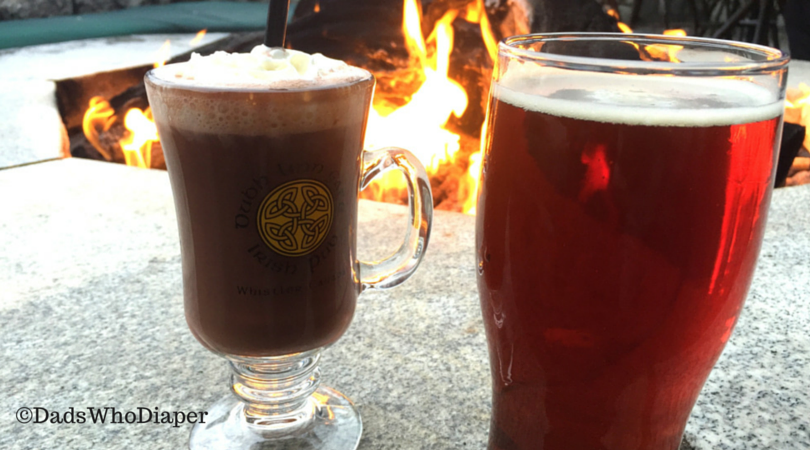 With a village that survives on skiers and snowboarders during the winter, après ski is the perfect way to end the day. With options like the Garibaldi Lift Company (GLC), Dubh Linn Gate Irish Pub, and The Longhorn Saloon, (and many more!) you can go from slopes to pints in moments. Be prepared, food and drinks aren’t cheap. Nachos are a popular post ski snack, and can set you back $18-27 for one plate. Though to give them credit, many are massive! After a long day on the mountain it shouldn’t be hard to share a plate and destroy it all. So come prepared with your checkbook. Each has an outdoor patio that can be enjoyed year round with heaters, fireplaces, and blankets at the ready for customers. 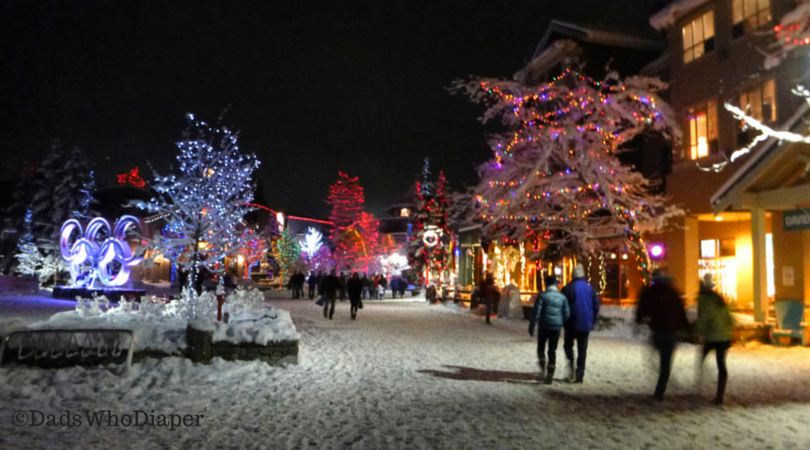 Whistler Village in winter is as picturesque as it is enjoyable. Split into three different areas each is connected by a pedestrian-only strolling walkway lined with shops, restaurants, nightlife, and more. If you can’t find a souvenir along the way it likely doesn’t exist. Whistler Olympic Plaza sits at one end near the marketplace and features events throughout the year. It also has one of the most photographed locations in town, with large Olympic rings primed for your smartphone or camera. 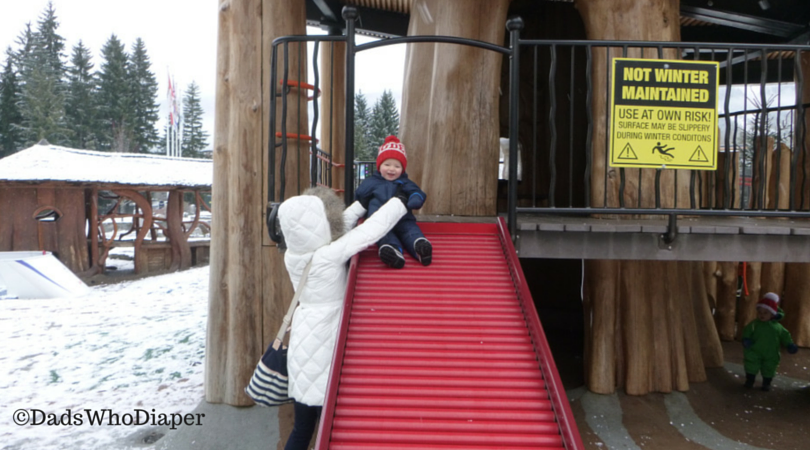 Whistler is completely kid friendly but you do need to be prepared. Ski school and daycare come with minimum age limits so you’ll need to plan ahead if you’ve got younger children. Many of the restaurants and bars do allow kids at least until a certain time and feature high chairs. Though not all bathrooms we found have changing tables, so there may be some challenges if your children are still in diapers. There are many kids friendly things in town including a playground adjacent to Whistler Olympic Plaza that has some great features. Fun can also be found at the Whistler Blackcomb Tube Park, plus Whistler Public Library has many kid friendly events including story times (look online for times). If you’re in need of a nanny or babysitter, Babysitting Whistler is a company that provides care and rentals of equipment. After lots of online searching, reading reviews, and calling and asking questions, we booked a nanny for three of the days we were visiting. If you choose to go this route, book early! They fill up very fast, especially during high seasons. We were a bit apprehensive letting someone unknown to us watch our son for awhile but our nanny turned out to be fantastic. She took him to the park and library, sent photos whenever we requested, and had our son smiling the second he saw her on the second day. She met us at the end of each day at the ski lifts so we could all enjoy après ski together. The exchange rate currently works in favor of those in the U.S. It varies over time but currently you’re able to get a little extra bang for your buck. Being a resort town and a very popular tourist destination, you can expect to pay resort rates. Food, groceries, alcohol, will all start to rack up over the course of your stay. If you rent a condo you can offset some food costs by cooking in your unit. Be prepared for a little sticker shock but again, if you’re heading north from the States, you do get a little bit of a break as the exchange rate stays in our favor. Also, don’t forget taxes. There are quite a few including Goods & Services, and accommodations are subject to a Provincial sales tax, and a Municipal Regional District Tax. Plan accordingly. 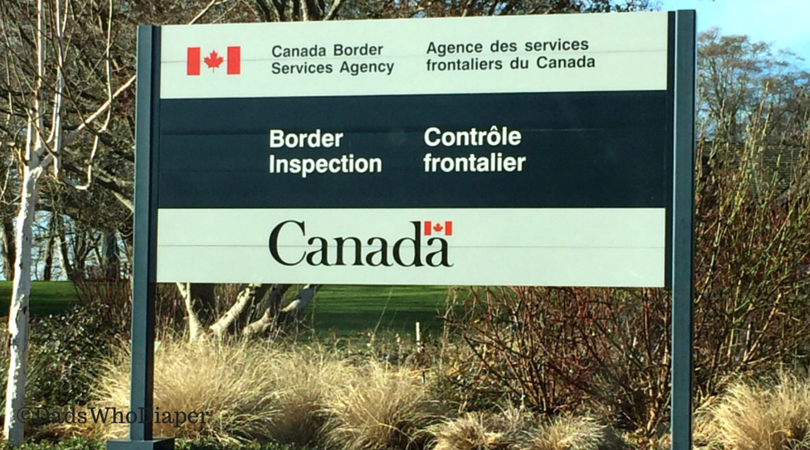 If you’re traveling from outside of Canada you’ll need the appropriate documents to enter the country. We drove from our home so the border crossing into Canada was rather swift. We saw a much longer wait coming back into the States (over an hour). If flying, all persons are required to have a passport or one of several other types of identification to enter the country. If driving or by sea, a young child is permitted to cross with a birth certificate. *Make sure you check the most recent requirements before you travel as requirements may change since publication.*

No goods or services were exchanged for this article, all thoughts and opinions are strictly our own.

How Much Should You Pay Your New Year’s Eve Babysitter?

Not Every Family Gets a Great Photo With Santa